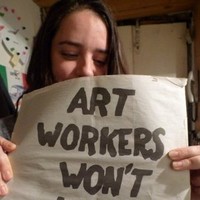 Aria Spinelli is an independent curator and postdoctoral researcher at the University of Amsterdam. Her PhD (Loughborough University, U.K. 2020)  has analyzed the ways in which curatorial practice is related to social imagination and performativity. Her main area of research investigates the relationships among art, activism, and political theory. She holds a bachelor’s from the University of Rome La Sapienza in contemporary art history, and a master’s degree from the NABA – New Academy of Fine Arts in Milan in visual arts and curatorial studies. A founding member of the artistic and curatorial collective Radical Intention, she was an associate researcher and member of the curatorial team of The Independent project at the MAXXI (Museum of the XXI Century for art, Rome) from 2018 until 2020. Between 2015 and 2020 she was an external curator at the Pistoletto Foundation (Biella) and BOZAR, Center for Fine Arts (Brussels). She has published many articles and is the editor of the publication Shaping Desired Futures (NERO, 2018). Between 2009 and 2012 she was curator at the Isola Art Center (Milan).

The following sums up what she sees as the core of her practice.

Aria Spinelli is a curator and scholar, unwillingly asking herself if art can bear social change. She looks for ways to describe how people engage and collectively imagine better worlds through artistic practice. Although she finds paths that take her far away from art and its institutions, she often ends up desiring to expand the field of art with her findings.