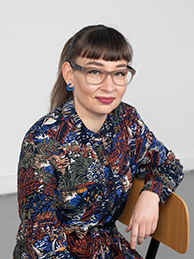 Eszter Szakács is a Ph.D. candidate at the University of Amsterdam. Specifically, she is part of an NWO-funded project at the Amsterdam School for Cultural Analysis titled IMAGINART—Imagining Institutions Otherwise: Art, Politics, and State Transformation. Previously she worked at tranzit.hu Budapest, where she coedited the online international art magazine Mezosfera and book IMAGINATION/IDEA: The Beginning of Hungarian Conceptual Art – The László Beke Collection, 1971 (tranzit.hu and JRP|Ringier, 2014), and curated the collaborative research project Curatorial Dictionary. What is more, she is a curatorial team member of the grassroots civil initiative OFF-Biennale Budapest and, along with Naeem Mohaiemen, coedited the forthcoming anthology Solidarity Must Be Defended (tranzit.hu, Van Abbemuseum, SALT, Tricontinental, and Asia Culture Center). Her research revolves around grassroots art organizing, questions of internationalisms, relations between Eastern Europe and the Global South, as well as exhibitionary forms of research.

That, at least, is Eszter’s formal profile. This is how she would describe her project in more imaginative terms:

Research, curating, postsocialist subjectivity rooted in Hungary—these are some of the things that currently define Eszter. Going back and forth between practice-based theory and theory-based practice, Eszter engages with the creation of structures, stepping up in hiatus, and finding ways to laugh. All of these gestures are necessary, she thinks, for being and doing in difficult contexts. At the moment, she relates to Ngũgĩ wa Thiong’o’s phrase “the riches of poor theory” on many levels.