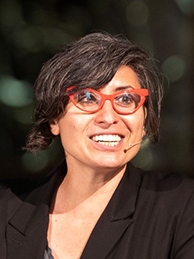 Chiara De Cesari is Associate Professor in European Studies and Cultural Studies at the University of Amsterdam. Having received a BA and MA from the Free University of Berlin and a PhD in socio-cultural anthropology from Stanford University, she has held research and teaching positions at the universities of Cambridge and Utrecht, among others. Her wide-ranging research explores how forms of memory, heritage, art, and cultural politics are shifting under conditions of contemporary globalization and state transformation. One strand of work explores how artists and activists are reclaiming and reinventing cultural institutions. Chiara is currently leading a major NWO-funded Vidi project on this theme, named “Imagining Institutions Otherwise.” Another concerns the transnational politics of memory and cultural heritage, above all in the West Bank. Her monograph, Heritage and the Cultural Struggle for Palestine (Stanford UP, 2019), argues that Palestinian civil society has enrolled museums and urban regeneration initiatives to assert its distinct cultural heritage amid the enduring Israeli occupation. Still another focuses on colonial legacies in contemporary Europe. Chiara is currently co-writing another monograph, provisionally titled Curating the Colonial, which explores how museums are reframing colonial histories in response to postcolonial critiques. Across these interests, Chiara has published many articles in journals such as American Anthropologist, Current Anthropology, and Memory Studies, and co-edited two key volumes in memory studies (European Memory in Populism, Routledge, 2019; Transnational Memory, de Gruyter, 2014) and a special issue of the International Journal of Heritage Studies on urban heritage and gentrification (2018). Committed to international and interdisciplinary collaboration, she has been involved in several major international research projects. Currently, she is also co-PI of the NWA project Pressing Matter: Ownership, Value and the Question of Colonial Heritage in Museums, and a member of the HERA’s “en/counter/points” project and the Trans-Atlantic Platform for Social Innovation’s “Worlding Public Cultures” network.

Beyond this official biography, this is the more intimate story Chiara likes to tell about herself:

Chiara is committed to erring and straying.

Of all the things that she teaches her daughter and students, the most important is the need to argue back, disobey, think, and do things differently. (With her daughter at least, this has worked pretty well).

She enjoys being a student; this is one of the reasons that she is in academia, along with her keen awareness that knowledge is empowering. She finds that being together in knowledge is a beautiful and joyous way of inhabiting the worlds that we have inherited.

After a tortuous journey, Chiara arrived in Amsterdam a few years back and is slowly and uncomfortably becoming (more) Dutch. Uneasily inhabiting places, languages, institutions, and disciplines has become a way of life. Although living within and pushing their boundaries is sometimes hard, there is always a potentia.

Her writings and projects dwell on issues of memory and heritage; plural, meandering roots; deep, entangled legacies; institutional inertia, resistance, and change; the interplay of representation and creation; and intersections of culture and politics.

She likes all good food (but not to cook!); old and dusty museums; biennials; Italian and Arab pop, videos featuring Nancy Ajram that are directed by Nadine Labaki (and dancing to them), and Mina and Fairuz; Ann Stoler, Anna Tsing, Saidiya Hartman, and Michel Foucault; her grandmother(s), whose hair looked like Angela Davis’; and of course Eurovision.

This is the more intimate story Chiara likes to tell about herself.