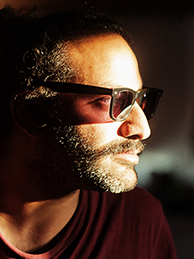 Born in 1981, Yazan Khalili is an architect, visual artist, and cultural producer.

He received a BA degree in architecture from Birzeit University in 2003, a MA degree from the Centre for Research Architecture at Goldsmith’s College, University of London in 2010, and an MFA degree at the Sandberg Institute, Rietveld Academy, Amsterdam, in 2015.  He has curated and produced several exhibitions, including The City | The Image in 2012, The Long Journey (along with the UNRWA Audio-Visual archive for Palestine refugees) in 2013, and Debt at the Khalil Sakakini Cultural Centre in 2018.  In 2015, he co-organized the “Walter Benjamin in Palestine” symposium and “Marx: The Ultimate Contemporary” in 2018. Between 2016 and 2018 he worked as an adjunct in the Media department at Al-Quds Bard College. Since 2019, he has been a faculty member in the Bard NY MFA program.  From 2015 to 2019, he was the artistic director of the Khalil Sakakini Cultural Centre in Ramallah and in. 2020 he co-founded Radio Alhara, a communal online station. Currently, he is a PhD candidate in the Amsterdam School for Cultural Analysis and guest artist in residence at the Rijksakademie, Amsterdam. His works have been exhibited in several major solo and collective exhibitions, including at KW, Berlin (2020); MoCA-Toronto (2020); New Photography, MoMA (2018); Jerusalem Lives, Palestinian Museum (2017), Post-Peace, Kunstverein Stuttgart (2017); Shanghai Biennial (2016); and Sharjah Biennial (2013). His writings and photographs have been featured in several publications, including eflux journal, Assuming Boycotts, Kalamon, Race & Class.

Below, he articulates the thrust of his practice in a less formal register.

Yazan believes in things that can’t be easily found: communal practices and support structures that distribute power and challenge existing structures. His beard is at once seen as that of a leftist and an Islamist; this, he thinks, is a sign of the problems of contemporary identity politics. He reacts to these problems by focusing on economic and cultural structures as a way of rethinking and producing politics. He is a slow reader but a fast learner who enjoys listening to podcasts. Given that he suffers while writing, he prefers talking, maybe because talking and listening are collective and communal acts. He follows his teacher’s advice: that any project whose aims fall short of changing the whole world is not necessary.

His artistic and cultural practice frames landscapes, institutions, and social and technological phenomena as politicized entities. He is interested in structures—institutional as well as others—especially how they are built and perform. This aspect of his work can be traced to his time leading the Khalil Sakakini Cultural Center in Ramallah, during which he was concerned to rethink the funding and foundations of this cultural institution in the context of settler colonialism.